Oracle DV viz components can be embedded into external websites which provides the ability to have Oracle DV canvases as a part of any website. To understand the embedding context from a technical perspective, there is an underlying Javascript file which provides this functionality. Depending on the technology used in the client web portal, one of the following embedding modes is used:

For this blog, we will be creating our own website and we will include DV contents as a part of the website. We will also explore the various steps involved to do DV embedding. Let us start with a bare minimum HTML code for our website displaying the name and a few texts.

The first step is to include the javascript file providing the embedding functionality inside the <head> tag. In this case since our website is a simple HTML file, the embedding mode will be standalone mode. We will be connecting to a public OAC instance to embed the Sample Project into our website. Oracle DV embedding is done through HTML API called <oracle-dv> tag. We need to include this tag as a part of our HTML code to enable DV embedding. Before we delve into the details of the code, following are the list of attributes that are supported for <oracle-dv> HTML tag.

Now coming back to the code, the next step is include <oracle-dv> tag and set the project-path attribute to the path of the project that we want to embed. Now our HTML code for the website should look something like this.

We are now one step away from including DV content into our website. The final step is to include the domain name of our website into the list of safe domains in the OAC instance from which we want to embed a DV project.

Since we are hosting the website on a localserver, we have added an entry for 127.0.0.1 along with the port number. If we want to do DV embedding on a public web server, add the domain name/ ip address of the web server to the list of safe domains. A refresh of the OAC instance is needed for the safe domains to kick in and now our website should look something like this

The rest of this blog will be focused on how to pass filters from our website to the embedded DV contents.

As mentioned before, <oracle-dv> supports filter attributes. In order to pass filters to the embedded DV content, we need to construct filter object with the following attributes.

We will be passing filter values on the Order Priority Column from our website to the embedded DV content. The HTML code should look like the one shown below. 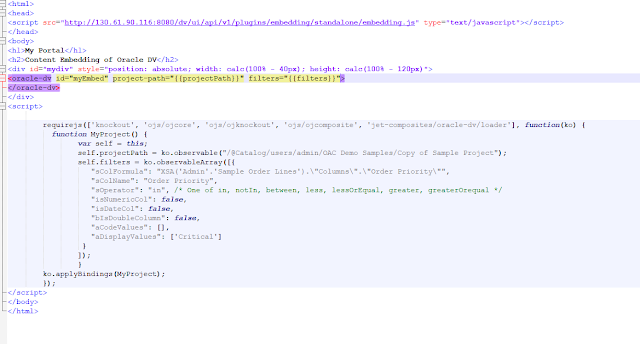 We are passing the value "Critical" on Order Priority column to act as a filter to the embedded DV content and our website will render the DV content with the context of the filter passed through our HTML code. 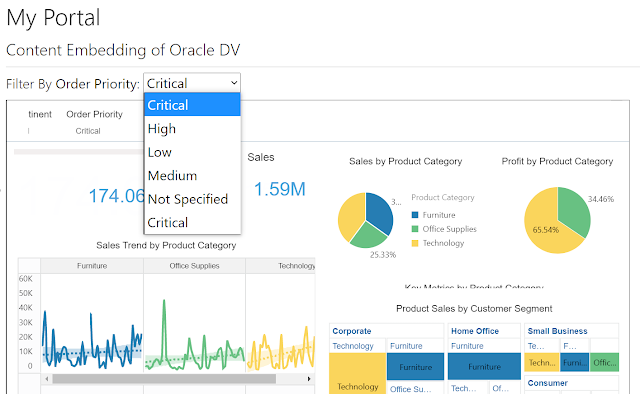 In the next blog, we will focusing on how to use data actions to pass values from the embedded DV content to our website. Thanks for reading.

Posted by oraclebitechdemo at 6:29 AM No comments:

Oracle Analytics is a comprehensive unified platform offering services including self-service visualizations, powerful data-prep tool, advanced analytics and augmented analytics.
In this blog, we are going to explain the use of leveraging custom-scripts using Oracle Analytics Desktop (OAD) and few tips and tricks to install additional custom Python packages that do not come by default with the Python engine.
Let us take the following scenario : a user has a dataset with an address column and needs to plot these address on a map visualization. In technical terms, he needs a geo-coding capability which converts valid addresses to corresponding Lat & Longs which can then be used for plotting on a map. .
One way for the user to achieve that would be to leverage Spatial Studio application (free with Oracle Database). Spatial Studio is a self-service web application that makes it easy for users to create interactive maps and perform spatial analysis on their business data. User just needs to upload his dataset into Spatial Studio and the geocoding service can then be invoked to find the corresponding Lat/Longs. Once done, the user can simply visualize his dataset in Oracle Analytics platform.
But the user has another option to achieve the same result : using Custom Scripts in OAD.
Oracle Analytics Desktop comes with in an in-built Python engine. This Python engine is wrapped around an internal layer called DVML which needs to be installed for a user to run custom scripts on OAD.
As of OAD 5.6, DVML uses Python version 3.5.2. OAD expects a particular format for a script to be accepted and executed by it's Python engine. This should be an .xml file with well-defined inputs, outputs and options tags. We can break down the process of creating a custom Python script on OAD into 2 simple steps
Coming back to our scenario where a user wants to perform geocoding, this functionality can easily achieved in Python through a package called geopy.
A custom python script can simply call the geocode function from this package, using the Address column as argument. If user creates such a custom Python script and uploads it into OAD, he can then simply invoke it from an Oracle Analytics Data Flow by using the "Apply Custom Script" node. This will let the OAD's Python engine to execute the geocoding script. But at this point, when the dataflow is executed the user is likely to see an error... 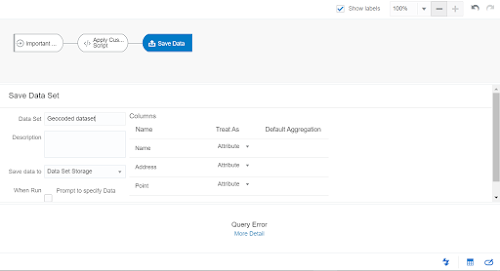 Checking the logs it becomes clear that geopy package was not found by DVML python engine. This is an indication that the geopy package needs to be installed as a part of DVML. When a user installs DVML, it comes with default set of commonly used Python packages like pandas, numpy, scikit-learn, etc. But how to install new python packages into DVML ?
Installing Python packages into DVML
Here are the steps to be followed to install Python packages into DVML on a MS Windows machine :  search for DVML Runtime and choose the option "Open File Location".
This will open the folder which has the shortcut to DVML. To get the actual location as to where the DVML files are installed, right click on the short-cut and choose the options "Open File Location". 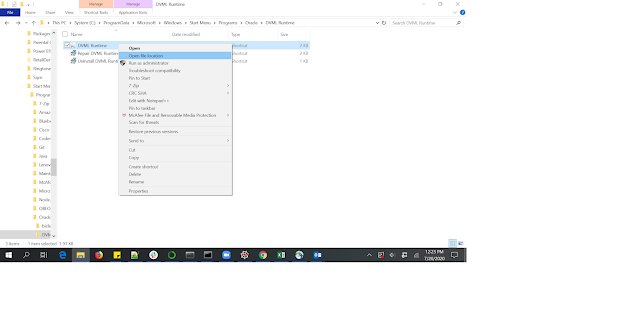 If the default path was chosen during the initial DVML installation (MS Windows machine), the DVML files will be under this directory : C:\Program Files\DVMLRuntime\PCbuild\amd64
Open cmd prompt and run it as an administrator. Navigate to the above path and type in the following command : python -m pip install geopy

This should install the geopy package as part of DVML.
If you encounter any issues in the above step you can try this alternative approach : search for DVML Runtime and open it as an administrator. This open up a Python prompt where a user can type in python commands. Type the following commands to install python packages.
from pip._internal import main
main.main(["install","geopy"])
In both approaches, replace geopy with the package you want to install and it should install the package into DVML. Once the user has imported all the relevant packages, these packages can be imported and used in the OAD custom scripts. Restarting the OAD and running the geocoding dataflow should now result in a successful execution. 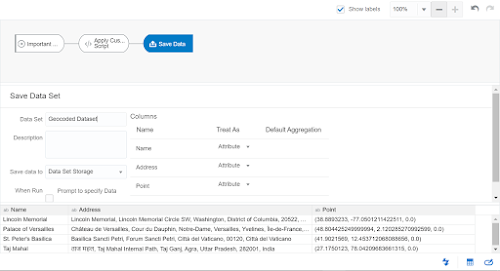 In this approach of geocoding, the user needs not switch between applications or do multiple upload or download of files to get the resultant output. The user can stay in OAD, run the Python script and get the resultant output.
Anything that you can do in standalone Python editor like a Jupyter notebook is possible in OAD by using Dataflows and custom scripts.
As of today, custom scripts import are only applicable to desktop or On Prem (OAS) versions of Oracle Analytics. The cloud version OAC is being worked on to support similar capability in the near future.
Geocoding Script Details

Email ThisBlogThis!Share to TwitterShare to FacebookShare to Pinterest
Labels: dataviz

Parameters of Random-Forest Algorithm for Classifications

Oracle Analytics includes several Machine Learning algorithms that enable data analysts to identify patterns in their data and make predictions on it. These various algorithms support different type of models : classifications, clustering or numeric predictions. Each algorithm offers several hyper-parameters to control the model training process and that can be manually tuned to improve overall model accuracy. It is important to understand these hyper-parameters to tune your training process in order to quickly get to the most accurate predictive model.

If we look in particular at classification models -both binary and multi-classification, Oracle Analytics offers several algorithms to perform it :

Each of these come with a set of hyper-parameters that can be configured. In this blog, let us understand in detail on the Random Forest algorithm and review these parameters, they are actually fairly simple to understand and leverage :

Random Forest is a classification algorithm that builds several Decision Tree models on the data and predicts using all these trees, called 'a forest of trees'.This algorithm builds each individual decision tree is by choosing a random sample data from the data set as the input. At each node of a tree, only a random sample of predictors is chosen for computing the split point. This introduces variation in the data used by the different trees in the forest.

Following is the list of hyperparameters available for this algorithm (for both binary classifications and multi-classifications):

Let us understand these parameters in detail:

To explore more about Random Forest algorithm and the effect of its parameters, let us consider a customer demographic data set with 1500 records. This dataset contains customer attributes like cust_gender, cust_marital_status, education, occupation, household_size and so on and we would like to train a model that will predict the customer response to an affinity card program with two possible outcomes Yes/No.

First, upload this dataset in Oracle Analytics. Next, create a dataflow with this input dataset and choose Train Binary Classifier step. Choose Random Forest for Model Training as the script.

Iteration 1: Let us leave these hyperparameters with default values and execute the dataflow. Successful dataflow execution creates a Machine Model which can be viewed from the Machine Learning tab. Let us right click on the model and inspect it to know more about its quality. With default parameter values, following is the model’s quality.

Iteration 2 : Let us increase the Sample Size of the tree from default 300 to 1500( as we have 1500 records in our input dataset). Let’s rebuild the model by executing the dataflow. Upon inspecting the model quality, we notice that while accuracy remains at 76%, precision has improved from 54% to 55%.

Iteration 3: Let us increase the number of trees from default 10 to 30 and Maximum depth from default 5 to 7.  Rebuild the model and inspect model details.

Every Machine Learning algorithm in Oracle Analytics comes with a set of model training hyperparameters that can be tuned to improve overall accuracy of the model created. Given that the model building process via Dataflows is a fairly simple and intuitive process, it becomes easy to iteratively change the model hyperparameter values, inspect the model quality and subsequently arrive at a model of desired accuracy in a reasonable amount of time.

Posted by oraclebitechdemo at 2:21 AM No comments: